Ryan Hoover’s advice for those starting out in their careers

“That’s what is exciting about Acadium. You’re getting an opportunity to get hands-on experience doing actual work with people who are actually doing the job today." 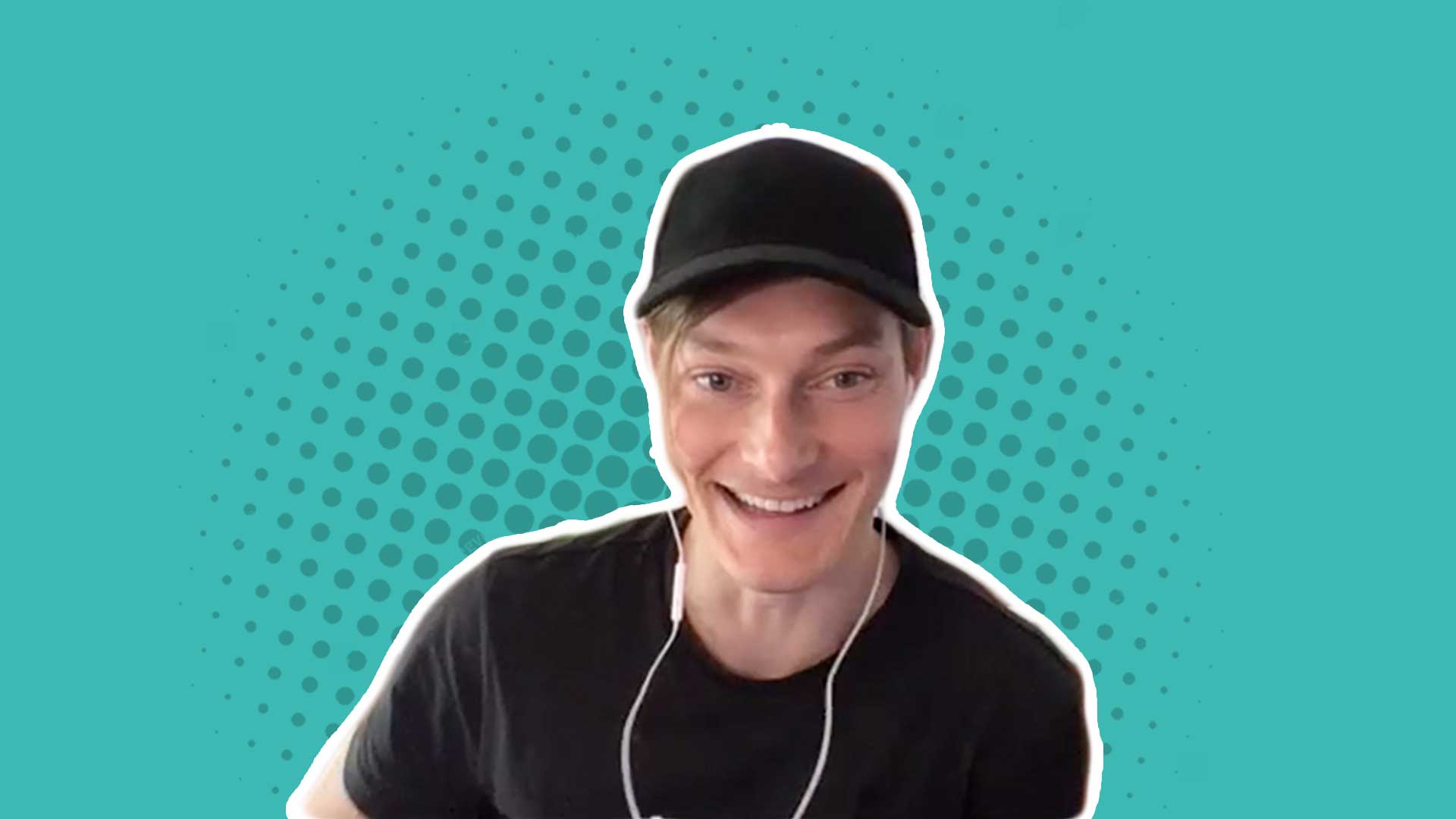 “Create something, put it on the internet, and see what happens. You can’t write a 20-page business plan or think your way into a company. You really just need to build and create.” 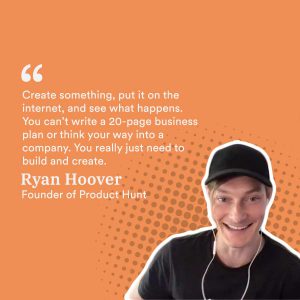 Who is Ryan Hoover

Ryan Hoover is the founder of Product Hunt, a place for product-loving enthusiasts to share and geek out about the latest mobile apps, websites, hardware projects, and tech creations. Ryan is also an investor in early-stage startups through the Weekend Fund. 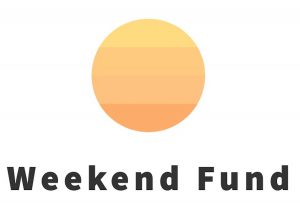 We spoke to Ryan on our podcast about Product Hunt, its origins, how it’s grown, and drew as much advice as we could for our community of aspiring entrepreneurs.

We also covered how to build a team as an early-stage or growing startup, what you should do if you just graduated, as well as the future of remote work.

Listen to our conversation with Ryan Hoover

[1:35] Ryan shares that Product Hunt started as an experiment, then a side project, then a business. He has always been interested in discovering novel apps and learning how people developed them.

[2:50] As he was sharing these apps and products with his friends he asked himself “why isn’t there a single website, or email list, with the coolest new products that just launched?”

Fast forward to today and, as TechCrunch states, Product Hunt has “ballooned in popularity since its humble beginnings and has since become a destination site where folks could submit and vote on their favorite tech products.”

You can’t think your way into a company

[4:05] “A lot of people have a thirst to start a company, but overthink it,” Ryan says. He built Product Hunt out of a desire to discover the latest products, but he also found a lot of value in just creating things. He affirms that “you just have to build something and put it on the internet.”

Product Hunt wasn’t the only thing he worked on and many projects didn’t go anywhere, but the process excited him and he learned a lot.

Of course, a lot more goes into building a successful company, but Ryan encourages anyone starting out to build things that they find useful for themselves. “Build something that seems useful for yourself and that’s fun… it will hopefully be more rewarding. Because if you’re building something for yourself you’ll probably be more motivated to see it through.”

You’ll be more curious when you’re enjoying what you are doing as well. Ryan tinkered and experimented with many things and that inquisitive mindset is what led to the idea of Product Hunt. 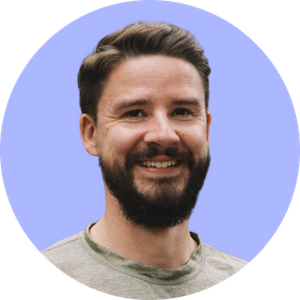 [6:10] Ryan took inspiration from Joel Gascoigne, the CEO of Buffer, with the idea to “build in public”. Ryan admired that Joel was extremely open with his company. Joel shared everything that was going on with their business and that made for “great content marketing”.

It was also great for building an audience. “People are thirsting for authenticity and the truth”, Ryan says as he explains that Buffer’s community felt very involved in what they were doing. “People felt like they were part of [Product Hunt’s] journey”.

Ryan took after Joel in the early days of Product Hunt. He wanted to generate more buy-in and excitement from their community around what they were building.

The unique way they went about doing this was to share their first designs of Product Hunt on Invision. An app that’s usually used to share mockups with your internal team was shared with their entire email list. “There were hundreds of comments within the first day”, Ryan says. This led to them getting incredibly helpful feedback before they even started coding.

Another way was to start a podcast. They thought it would be fun and would help build a connection with their audience. They wanted to create a conversation about tech, not just an interview with guests.

We learned that if you want to build a community, it might help to:

What projects to work on as a startup

[9:40] When asked how he filtered through all the feedback that he would get from his audience, Ryan admitted that getting feedback from their audience was easy because they were all creators, founders, and tech enthusiasts.

However, If you are 100% reliant on the feedback of your audience, Ryan warns that you’ll just work on features and not reach that next evolution of the company.

By thinking in systems, Ryan explains, you can understand how each feature affects the whole experience of the product. It requires a deep understanding of the value the business is providing.

There seems to be a dichotomy between the customer’s right mindset and following your vision of the company.

When discussing adding features, Ryan suggests focusing on the single metric that it is supposed to impact. By doing this you’ll quickly be able to see what is worth your investment and what isn’t.

“You should be working on the things that probably won’t work, but might have a two, three, five X kind of impact on the business.” 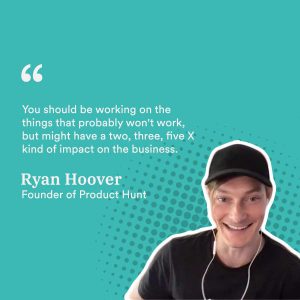 [13:40] As Product Hunt began to grow Ryan couldn’t do it all on his own. He had to build a team around him to fill the gaps in his expertise. Ryan emphasizes the importance of hiring.

“The biggest leverage you’ll have is building a team”, he states. He also highlights that when you start a team you want generalists, but as you scale you want more specialists. Ryan admits that the whole purpose of raising venture capital early on was to hire a team.

When looking for the right people to hire Ryan recommends finding roles that augment your own. You’re one person with only so much time so finding people to hustle hard and work alongside you is key.

What do you look for in people when you’re considering hiring or investing in them?

[19:50] Ryan’s favourite question to ask people who he’s considering hiring or investing in is:

“You could be working on a million different things; why are you building this?”

Ryan shares that sometimes you learn that they are just building something to say they built a company. Likewise, for a potential hire, they may just want the name of the company on their resume. That may be a flag that they aren’t going to stick it out when it gets tough.

Advice for those just graduating

[21:20] Ryan acknowledges that he is very skeptical of the post-secondary education system. He reiterates his advice to start creating right away and put your creations on the internet. He also encourages students to join online communities as a way to meet people and learn.

“I would first create something on the internet. That could be a podcast. It could be a website, it could be a newsletter; really anything that excites you and gets you interested and curious. I wouldn’t overthink it. Some people overanalyze and never ship; just ship something.”

[26:00] Ryan goes back to his skepticism about college and explains he has a bias toward getting real-world experience instead of textbook knowledge.

“That’s what is exciting about Acadium. You’re getting an opportunity to get hands-on experience doing actual work with people who are actually doing the job today. Rather than reading textbooks and going through theories with professors who haven’t built companies before.” 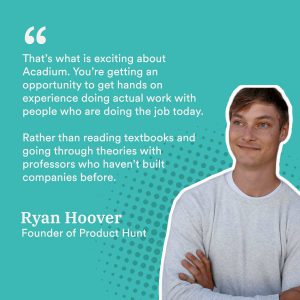 Should I work at a corporation or a startup?

[23:05] Ryan weighs the pros and cons of both working for a large or small company. He stresses that you should look for a company that is on a rocketship trajectory. He draws this conclusion from advice he received early on in his career to join Pinterest if he wanted a new job.

This was before Pinterest was where it is today, but Ryan advises to look for the next big company before it takes off and to join them.

Remote working for the future

[28:30] Ryan wrote a blog post about the problems of remote working in 2019 almost exactly a year before the COVID-19 pandemic. Product Hunt is a distributed company and Ryan shares a lot of the benefits of a remote company.

“If you only hire locally, you’re limiting yourself to maybe 1% of the talent pool, maybe less. Whereas if you’re hiring globally, now you have essentially the entire world to hire from.” 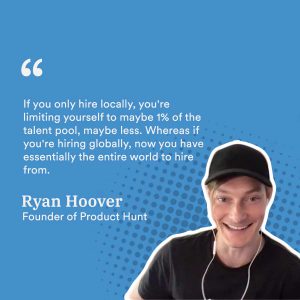 [30:30] Although access to talent is much greater for a distributed company, Ryan admits that the drawbacks are also well documented. Things like:

These are all challenges that the new normal of remote working will have to address.

“These really talented, high demand people want this lifestyle and flexibility.” Things were moving towards remote work before the pandemic and the pandemic has only been accelerated this shift.

The surprisingly hard and easy things about starting a business

[36:30] Ryan comes back to explaining that running a business is like a video game with different levels. He says that startups are like step functions rather than linear growth.

You meet walls and discover that the things that were once working no longer do. Startups have to constantly reinvent themselves as they advance through new levels.

[38:25] Ryan shares that the surprisingly easy thing about starting a business is the administrative tasks. He shares that many startup founders are overwhelmed with all the things they don’t know about, like legal work.

“All these things are well documented and easy if you have people you trust”, he says. “Don’t get paralyzed by these operational things. Getting someone who knows these things is really helpful.”

Finally, he shares the importance of finding mentors in your career:

“Finding mentors and people who have built companies before and getting somebody to hold your hand a little bit and walk you through and connect you with the right people – that’s really helpful.” 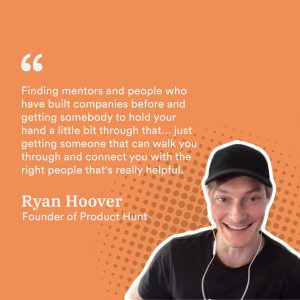 Ryan Carruthers is the Content Marketing Manager at Together Software, a company that builds software to help enterprise companies run effective mentorship programs within their organizations. Ryan was an Acadium apprentice and leveraged his apprenticeship experience to get a job at Together.

Become a better marketer with our digital marketing resources and tips shared weekly in your inbox.

Build your marketing career for free or find marketing talent on any budget — fully remote.

Any cookies that may not be particularly necessary for the website to function and is used specifically to collect user personal data via analytics, ads, other embedded contents are termed as non-necessary cookies. It is mandatory to procure user consent prior to running these cookies on your website.